All we know is the uncertainty of the unknown. It’s not always easy to remind ourselves of that revealing fact. In fact, we create structures, calendars, organize, orient and project our todays into tomorrows. We place rocks nicely in a path and think, if life takes me on this path, great, what a nice walk way I’ve shaped. There are many times when you find yourself on a path you didn’t even think to manicure and there you are, quickly placing stepping stones and trying your best to walk sure footed. And to add to the analogy, when you do find yourself on an unpredicted path one can sometimes stand there stunned. You knew in your core that there was a wedge of a chance of being redirected to this route and you maybe didn’t do all you could to prevent it or prepare. A plot fit for Shakespeare, a nonfiction wrapped in restless nights.

So here I am, creating a new walkway off the dirty plaid farmer cuff. Ahh, farming with its wondering roots and acres of outcomes. This unhypothesized path, full on bug take over! 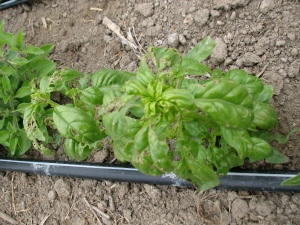 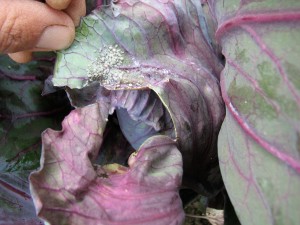 Crikey Folks! What we have here are some genuine organic vegetable eating forms of wildlife! Just look at those voracious fangs and tenacious appetites-a force to be reckoned with, and I reckon we better reckon with it. To be honest, I’ve never had to deal with pest pressure like this before. I’m not sure if it’s due to a mild winter or a muggy, but not really hot summer or both. What I’ve identified thus far are earwigs, cabbage moths, flea beetles and aphids; freakin’ aphids! It has been quite interesting, because it has just been in the last two weeks where I’ve noticed apparent damage and an evident spike in pest population. All the spring planted and directed seeded crops grew and thrived untouched.

I do have to say that one of my least favorite elements of farming, beside the element of having your crops being ‘harvested’ by bugs, is the act of killing them. I would much rather focus on growing strong and healthy plants that are less prone to attracting such bullies. A part of me completely understands. Yes, this food is yummy. If they knew how to share I wouldn’t have a problem. But there are times for the fight and this goes with the job. The arsenal of ‘this is what my grandma used to do’ has been opened and is being put to the test.

The good news is that the big bad bug killing farmer is making ground and I hope to see a white flag waving when I next poke my nose into a head of maturing cabbage! It seems like the earwigs are meeting a nice, dare I say somewhat pleasant end, by being attracted to the sweet ferment of beer and then drowning. And not just any beer, homebrew fresh from the tap is being used in this operation, only the best to lure these buggers. I’ve also been making rounds of hot pepper and garlic spray. I’ve been using ground cayenne peppers from Green Fire Farm and adding garlic to water and letting it steep for a few days. I’ve been spraying this on newly emerging seedlings to deter the flea beetles. Just because an operation is organic, doesn’t mean that it’s ‘no spray’! And my latest, piece de resistance, a job like this needs ultimate girl power – Ladybugs! Yep, Homeward Bounty now has 3,000 employees. 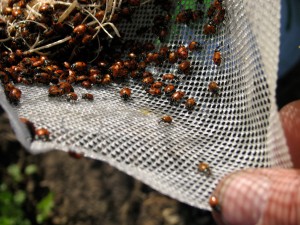 There will never be a moment in this year’s farming endeavors where I moved beyond being humbled, being in awe. It could be a discouraging day on the farm and then I get greeted by this on my drive home. Maybe this unpredicted path isn’t too bad.