The cold muse sauntered in unseasonably late this year. Summer flew away on the wings of staggered chevron teams of Canada Geese.  However, there was no haste to their migration. They didn’t tug at the warmth of the sun or take the flowers with them and we didn’t get morning fields, held in freezing fog, from their exiting draft. They would call, as geese do, their gossip perky, echoing on dry, unwintered, mountain tops.  The geese have migrated with prediction, unpredicted has been lettuce, cabbage, even the stray tomatoes out in the field, that have continued to seize the mild weather and sustain their growth in the moment.

The cold muse’s tardiness allowed for unprecedented extention of our Siskiyou County harvest window. September tumbled into October, and October into November, as months in single harmony. The end of the season sprint kept curving around the bend with no noticeable ending.  The cold mornings usually play their roll in taking the season away, the dutiful farmer in turn tills it all in and sows the closing of the season and cover crops, until spring ground is broken.  But this has been the fall of perpetual harvest, can one really lament? It’s been an extended season of bounty, fresh salads and soups, more sharing and lengthening of connection to the harvest. The Mt. Shasta Harvest Connection for example.

Jonathan kept me together at markets!

The cold muse has been late this year,  and with it so has my reflection of the season, this cold morning by the fire to write, ponder and absorb. Now, with snow on in the Eddies, on Goosenest, Black Butte and a white Shasta, the season can begin to close and go in. An eminence of blessings and thanks for another powerful season of growth can radiate out.  In MANY ways this was the most challenging season yet, with the heat and earwigs taking the farm into a deep hole for the month of June. July and August were kind and our mega-late summer kinder still. Homeward Bounty Farm’s Fourth Annual Harvest Dinner, yet again, held special space and was visited by an auspicious lunar eclipse. The high tunnel is teaching me volumes and produced the most stunning cauliflower crop I’ve have had the honor of growing. This beautiful community, my Siskiyou County home, continues to support, value and connect deeper with the local food experience! This land continues to find connections in family and friends. People who want to give to this property, this farm, to the earth and plants, to step into the pattern and cycles. Farmer and farm couldn’t be luckier and happier or more honored. 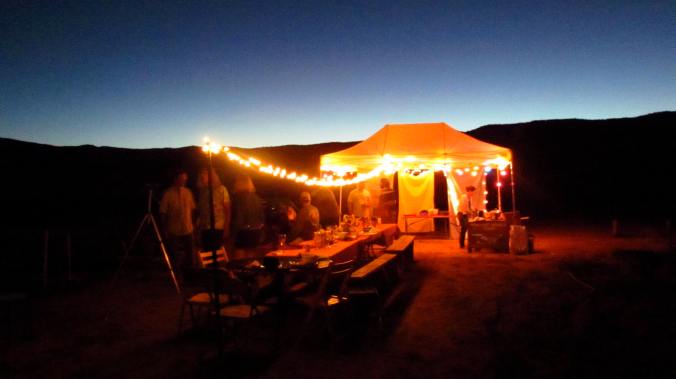 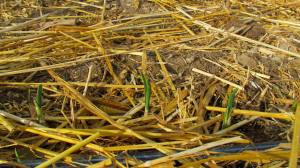 Garlic starting to pop up. 2016 already in the works.

Lettuce still growing in the field. One of my favorite varieties, Drunken Women. 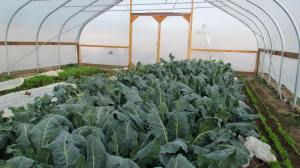 The cold muse that has finally brought a slowing ease to the season, did indeed come later than expected and with it I’ve delayed my favorite poem of a season’s close.  A poem that usually comes in with the geese and frost comes in now, mid November. May we have a defined wet winter and a poignant start to spring and continued seasons of bounty.

The Summer Ends   By Wendell Berry

The summer ends, and it is time
To face another way. Our theme
Reversed, we harvest the last row
To store against the cold, undo
The garden that will be undone.
We grieve under the weakened sun
To see all earth’s green fountains dried,
And fallen all the works of light.
You do not speak, and I regret
This downfall of the good we sought
As though the fault were mine. I bring
The plow to turn the shattering
Leaves and bent stems into the dark,
From which they may return. At work,
I see you leaving our bright land,
The last cut flowers in your hand. 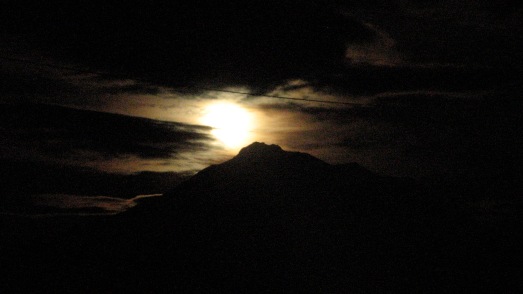 I keep thinking that this is an odd season, but what season is normal anymore? Will we learn to be the most flexible and diverse generation of humans living on this Earth? Will we start to understand change as normal, be easy-going and learn to purely live in the moment, as the future becomes increasingly unpredictable? Will we have to select for and breed varieties of vegetables to mature in smaller and shorter windows, because the weather tomorrow, weeks and months ahead will continue to consistently weave in and out of elements? Will we find the stability in the unsuitability?

In a heat wave! I get the feeling that this heat is eagerly waving ‘Hello’ and I wave too; also eagerly, ‘Good-Bye,’ but it doesn’t seem to pick up the subtle cue. It took my cloths approximately 15 minutes to dry on the line the other day. 100 degree weather and a slight Southern breeze left them stiff and dry and wishing to be folded up and quickly placed in the cool dark closet of my room. I wanted to fold myself up with them, to be organized with the sweaters and to come out only when they were beckoned.

What luck that I didn’t ball up and seek solace amongst the wools and fleeces, for I would have missed last night’s party of lights! Lightening chiseled into the horizon, with a flash and low rumble boom! The clouds around us playing aurora tag with every imaginable color. Not a time to be a sweater, a time to soak in the elemental moment, be present, stable and to know of change.

With the lamenting of the heat I share with you this summery meal that I whipped up last night – served best with CHILLED white wine!

1/2 cup nuts – I used walnuts and like to toast them in the oven a bit to bring out a roasted flavor. Brazil nuts are great in pesto as well!

salt and pepper to taste

Directions – Put All in a blender and blend. Adjust different elements to taste. This pesto comes out nice and earthy. It has the taste of spring, but the influence of summer, as you can almost convince yourself there’s basil in it.

I love the edge times. The times of transition; when you’re leaving and before you’re there, you’re in the middle, the center. You’re drumming the sun down and each bow. Gold exits West, into the belly of the Klamath Range and towards the calling Pacific waves, a glowing corona that will linger on the cheeks of Mt. Shasta and has left ours a little rosier.

Drumming the moon up, silver and dilated. In the middle of these two bookends, the ones that hold up our stories, we drummed, in the center. 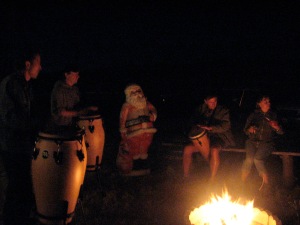 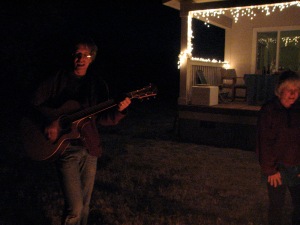 The season is starting to grow! It seems yet too cold to utilize the lovely greenhouse that my Dad built last year. The saving grace glass house, built from 10 sliding glass doors, has been highly utilized and appreciated. Unfortunately, it is not perfectly air tight and with consistent frosty mornings and days, where pine needles and human bones struggle to thaw, I opted for an indoor kick-start. Here, on an old metal shelf, I’ve towered trays of onions seeds. I have heard no cries of unsatisfaction, as the sun shines in. Mt. Shasta smiles through the frame of the window and the ambient house warmth keeps soil hospitable and encouraging.

After a very positive response towards last year’s fresh and cured onions, I decided to increase the crop this year. Scattered in these trays are future French Onions soups, sweet crunchy rings of the Siskiyou Sweet, elegant purple torpedo shaped Tropea and the patiently cured paper skins of red and yellow varieties, for 2014 storage.  Yes, the yummy year begins.

Green energy starts to fill the house as the first seeds germinate. They’re yogic presence is rejuvenating, energizing, calming, these happy little lights already representing such gratitude. From delicate charcoal-like seeds, the onions seedlings start to emerge. They slowly rise up and stay suspended, stretching themselves out in a new life welcoming: downward dog. As many of us could, they stay there, looped with the soil, relaxed, breathing. Slowly they rise, bring their heads and arms up, welcoming the sunny day. They take a look at the mountain and offer up a gift, their hollow seed pod. 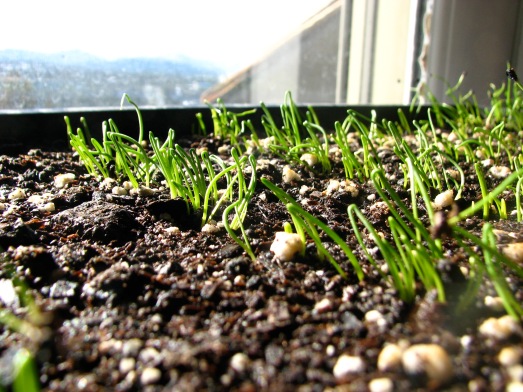 Onions stretched out in a relaxing downward dog. 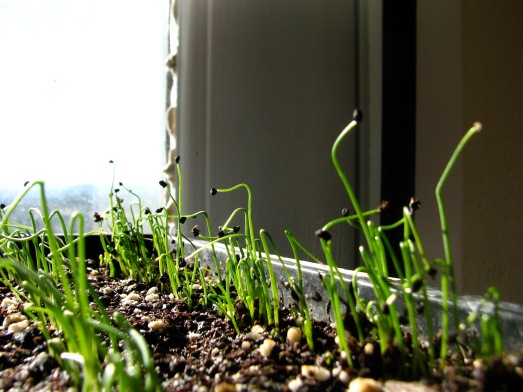